Another Marijuana Penny Stock Flames Out

It’s a familiar marijuana stock story. A small marijuana cultivation company sees its stock trade higher as shareholders bet on business that will come in the future. If the promises don’t materialize, then the stock value plunges and the shareholders are left empty handed. This time the drama included a newspaper reporter, a government agency and a company president that is accused of selling stock at a questionable time.

Creative Edge Nutrition (CEN) had been telling shareholders for months that it was applying for a license to grow marijuana in Canada and would be the largest cultivator in the country. Bill Chaaban, then CEN’s CEO told TheStreet.com back in March of last year “My intention is to grow enough cannabis to supply Canada and build an export market.”

I even interviewed Mr. Chabaan last year for TheStreet where I pointed out that his company didn’t actually have any approval from Canada to grow marijuana. Chaaban stated they had received an approval to build and made it sound as if the next step would be a formality to get the license with the company beginning to grow by year end. I even asked Mr. Chaaban, “If this doesn’t go well, what happens to these three million outstanding shares?” His answer? “We have every reason to believe it is going to go well.” It didn’t. 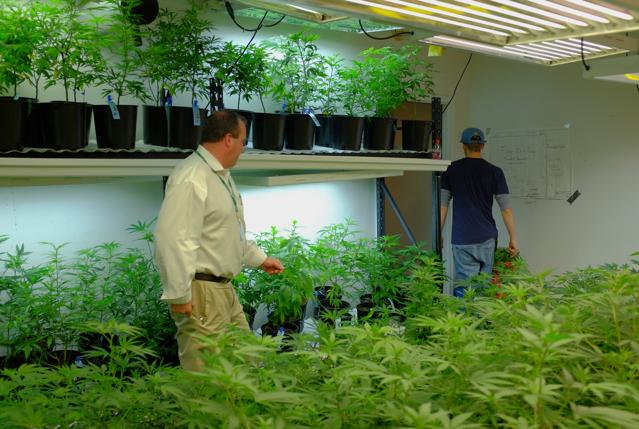 Corey Young, a founder of courier service CannaRabbit LLC, makes a stop at a grow facility to pick up marijuana samples for transport to a lab, in Lafayette, Colorado, U.S., on Friday, March 27, 2015. CannaRabbit and peers are rushing in as regional truckers and nationwide haulers United Parcel Service Inc. and FedEx Corp. steer clear of transporting marijuana on concerns over the lack of nationwide clearance of a practice that is still illegal in most states. Photographer: Matthew Staver/Bloomberg via Getty Images

CEN’s application was denied, after the company spent $9 million dollars in order to build a facility in anticipation of getting approval. CEN first learned of the rejection when a reporter Grant Robinson of the Canadian newspaper The Globe called the company on February 13 to ask for their reaction to losing its license request. CEN says it had no knowledge of Health Canada turning down its request and questioned the reporter on his information. Specifically, how did a reporter have this information when the company did not? Health Canada won’t discuss how the reporter got the information before the applicant

Health Canada supposedly sent the rejection letter on Friday Feb. 13 by express mail company Purolator at the end of the working day. According to CEN, the letter didn’t arrive until Wednesday the 18th and it went to Mr. Chaaban’s personal address, not the address on the application. The company is based in Michigan.

What happened next is at the heart of the saga. The Globe published a report on the following Saturday saying that the company had been denied. This eventually turned out to be true. In February, Health Canada informed CEN it was going to be rejected, but had 20 days to try and change the agency’s  mind. CEN spun this to shareholders as the license was imminent and Health Canada just had a few more questions. In fact, the February communication from Health Canada was a warning the approval would not come. What followed was to be expected, shareholders rushed to sell the stock.

It wasn’t until March 11th that Health Canada finally officially denied the application. CEN fought back with a court challenge. The judge suggested the company drop the claim and just reapply for the application before the April 10th deadline. This seems to be CEN-Biotech’s plan. However, if you have followed this drama, you know that it isn’t in CEN’s DNA to stay quiet.