PORTLAND, Ore. (AP) — Voters in Oregon and the District of Columbia legalized the use of recreational pot, elating marijuana activists who hope to extend their winning streak across the country.

Oregon will join the company of Colorado and Washington state, where voters approved the recreational use of marijuana two years ago. The District of Columbia is on the same path unless Congress, which has review power, blocks the move.

Another marijuana-legalization measure in Alaska was maintaining a steady lead in early returns.

Other volatile issues on state ballots on Tuesday include gambling and abortion. Voters in Washington state, faced with two competing measures on gun sales, approved an expansion of background checks. And several states including Arkansas and South Dakota approved minimum wage increases.

The District of Columbia’s marijuana measure would make it legal to possess up to two ounces of pot and up to three mature marijuana plants for personal use, but it does not provide for the legal sale of marijuana, leaving that matter up to the D.C. Council. That’s different from the measures in Oregon and Alaska, which would follow the example of Colorado and Washington state in setting up systems for regulating and taxing retail sales of marijuana.

The Drug Policy Alliance, one of the leaders of the legalization campaign, said Tuesday’s results would bolster its efforts to push through a ballot measure in California in 2016.

“The pace of reform is accelerating, other states are sure to follow, and even Congress is poised to wake from its slumber,” said Ethan Nadelmann, the alliance’s executive director.

Oregon’s measure calls for pot legalization by July 1, and requires the state Liquor Control Commission to adopt regulations by Jan. 1, 2016. The state’s sheriffs were among the law’s chief opponents, contending that legalization would give children access to marijuana and could lead to more people driving under the influence.

The campaign in D.C. included a debate about race — the measure’s supporters said blacks in the city had been disproportionately targeted for marijuana arrests. 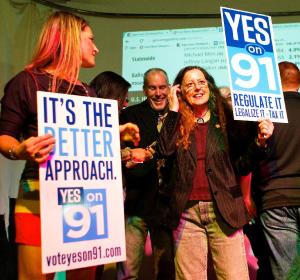 “The criminal justice system is getting bogged down by marijuana use, and a lot of the people who use marijuana aren’t criminals,” said Gary Fulwood, a support staffer for the city’s fire and EMS department who voted for the initiative. “I don’t see it being any worse than alcohol.”

In Florida, a measure that would have allowed marijuana use for medical reasons fell short of the 60 percent approval to pass; near-complete returns showed it getting about 57 percent of the vote. Twenty-three states allow medical marijuana.