Los Angeles (AFP) – Marijuana users in Colorado and Washington are counting down the hours before the western US states become the first to legalize recreational pot shops on January 1.

Blazing a trail they hope will be followed in other parts of the United States, cannabis growers and others are also rubbing their hands, while tax collectors are eyeing the revenue the newly-legalized trade will generate.

Enterprising companies are even offering marijuana tours to cash in on tourists expected to be attracted to a Netherlands-style pot culture — including in Colorado’s famous ski resorts.

“I have people driving in from Texas, Arizona, Utah… to be a part of history.

“Over the last month I have received somewhere between four to six emails a day and five to 10 phone calls a day asking all about the law and when should people plan their ski trip to go along with cannabis,” he added. 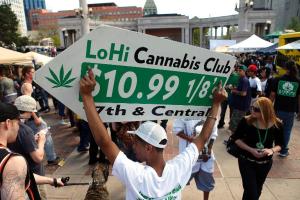 People gather for a ‘marijuana rally’ at Civic Center Park in Denver, Colorado, on April 20, …

Medical marijuana is already legal and regulated in 19 US states, and has been allowed in some cases for the past 20 years. And in most of them, private consumption of cannabis is not classified as a crime.

But Colorado and Washington are creating a recreational market in which local authorities will oversee growing, distribution and marketing — all of it legal — for people to get high just for the fun of it.

The market is huge: from $1.4 billion in medical marijuana in 2013 it will grow by 64 percent to $2.34 billion in 2014 with recreational pot added in Colorado and Washington, according to Arcview Market Research, which tracks and publishes data on the cannabis industry.

In Colorado, famous for its Rocky Mountain ski resorts, officials this week issued 348 retail marijuana licenses including for small shops which from January 1 can sell up to 28 grams of pot to people aged 21 or older. 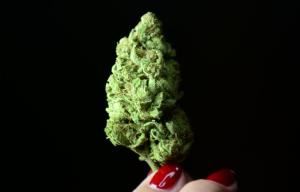 A bud of Maui Afghooey marijuana is seen at the PureLife Alternative Wellness Center in Los Angeles, …

Washington state authorities have received applications for 3,746 marijuana business licenses, including 867 retail licenses, according to The Seattle Times newspaper, which urged caution in an editorial.

“Legalization of marijuana (is) a seismic change in drug-control policy, perhaps the biggest since the end of alcohol prohibition. Supporters and skeptics need to take a deep breath,” it said.

Colorado’s branch of the National Organization for the Reform of Marijuana Laws (NORML) said everyone will benefit.

“It will also have an impact in that marijuana sales will be brought out of the shadows and the black market,” she added.

Michael Elliott, head of the Medical Marijuana Industry Group, noted that Colorado has licensed medical marijuana businesses since 2010, but said the influx of tourists for recreational use of pot could lead to shortages.

“It looks like demand will exceed supply, so I anticipate that prices in Colorado will go up … But as time goes on, more businesses will open meaning there will be more supply,” he added.

Telluride Bud Co’s Raleigh compared decriminalizing pot shops to legalizing same-sex weddings, which are now allowed in more than a third of US states.

“Give it six months, and when other states see that the sky didn’t fall and the revenue we are producing, I believe this will spread just like gay marriage,” he said. “You just can’t stop the will of the people.”