Colorado embarks on an unprecedented experiment 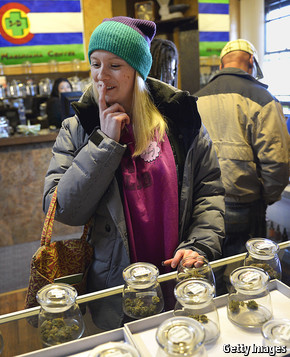 FOR reasons as hazy as a cloud of Sour Diesel smoke, the number 420 is cherished by America’s stoners. So it was fitting that on January 1st, 420 days after Coloradans awoke to discover that, along with Washington state, theirs had become the first jurisdiction in the world to vote to remove the criminal prohibition on recreational marijuana, around 40 state-licensed pot shops flung open their doors to all-comers. Four-hour queues snaked along the streets of Denver and other cities. Swamped by newbies, many from out of state, shop staff toiled to explain the difference between sativa (which delivers a “cerebral”, energetic high suited to daytime use) and indica (a depressive effect; better consumed late).

“Should’ve done it 40 years ago!” growls a middle-aged man making his first purchase at Medicine Man, one of Denver’s biggest retail outlets. (A home-grower, he later confides that he got bored smoking the same old strains.) For optimists, the votes in Colorado and Washington suggest that America’s war on drugs is finally winding down. The casualties have been legion: 750,000 people are arrested each year for marijuana alone; the subsequent blotted records can derail lives. Some 40,000 people languish in prison for pot-related offences. Murderous gangs fill the supply gap created by prohibition. 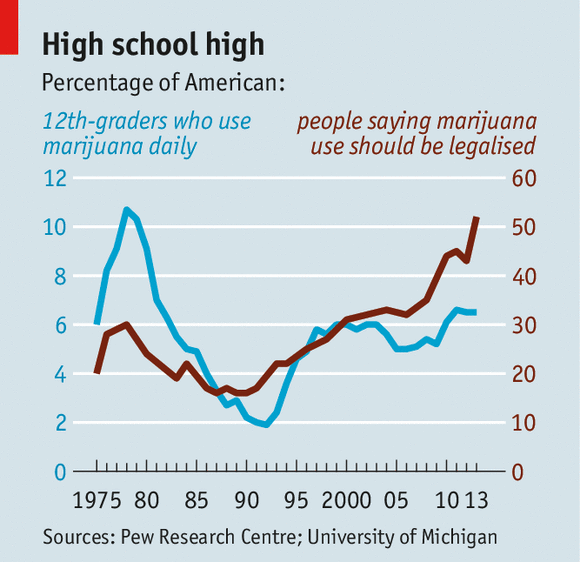 Public opinion appears to have reached a tipping point. Most Americans now favour legalisation; something that was unthinkable a generation ago (see chart). Advocates have waged savvy campaigns, gaining footholds by legalising marijuana for medical purposes (so far in 20 states and Washington, DC) and presenting a clean-cut, besuited image worlds away from the tie-dyed stereotypes. More states may free the weed before long.

Yet legalisation is just the beginning of a process, and Colorado and Washington have taken different routes. Colorado has built on the foundations of its medical-marijuana system. Until October (and 2016 in Denver) only medical-marijuana operators may receive licences to serve recreational customers, which is why many of the shops that welcomed newcomers on January 1st have names like Citi-Med and Evergreen Apothecary. (Retailers exult that they are no longer obliged to speak of “medicine” and “patients”.) During this time Colorado’s retailers must grow at least 70% of the marijuana they sell.

Washington, by contrast, is creating a recreational market from scratch; this is why its shops are not expected to open until May or so. It will have a three-tier system, with separate licences for cultivation, processing and retail. The state will determine, Soviet-style, consumers’ annual needs in advance and cap overall production. The fate of its medical system, more chaotic than Colorado’s, is uncertain.

Under federal law, marijuana remains illegal. The feds have pounced on dispensaries in states with badly run medical systems. But in August the Department of Justice suggested it would let the experiments in Washington and Colorado proceed if they did not impede eight “enforcement priorities”, including stopping pot from being trafficked by gangs, sold to minors or smuggled into other states.

Worryingly for Colorado, its record in these areas is not stellar. Plenty of teenagers are getting their hands on medical marijuana procured by adults. Police in neighbouring states such as Kansas complain of Coloradan marijuana flooding border areas. Colorado has a fat rule book and most dispensaries are well run, but they can do little about customers passing pot to children or taking it across state lines. And in Colorado (but not Washington) anyone may grow up to six marijuana plants without a licence.

Legalisation may prompt people to smoke and eat more marijuana. Prices for recreational pot are comparable to those in the illicit market ($55-$60 for an eighth, according to Darin Smith of the Denver Kush Club, a retail outlet). Some non-tokers will surely be tempted to take up the habit now that they need not deal with intimidating criminals in dark alleys; others may get high more often.

The ill-effects of marijuana, including cognitive impairment and a risk of dependency, are fairly well documented (though more research would help). Around 20% of users account for 80% of consumption; as Mark Kleiman, an analyst, points out, it is in a profit-seeking industry’s interest to target these problem users. Set against this is the genuine pleasure that smoking or eating marijuana brings millions of adults. Moreover, increased marijuana use may turn out to be a net positive for public health if, as some studies suggest, it replaces some consumption of alcohol—a far more destructive drug by most measures.

That is not the only reason for officials to welcome legal weed. Hefty excise and sales taxes will boost state coffers. In Colorado the Department of Revenue oversees regulation; this, says Sam Kamin, a law professor at the University of Denver, is good news for the industry, for “marijuana may not be addictive, but money certainly is”. The costs of enforcement—including 22 field inspectors—will be more than covered by the fresh revenue.

Perhaps the biggest sign of change is that even foes of legalisation accept the need to try to make it work. All-out drug warriors are hard to find in Colorado. For their part, campaigners now focus on technical matters. For example, many pot businesses struggle to obtain basic financial services because banks fear violating federal money-laundering rules. Colorado’s experiment will doubtless hit many hurdles along the way, but if it looks like working, others will copy it.

From the print edition: United States