On Jan. 1, 2014, Illinois became the 20th state in the nation to legalize marijuana for medical use, although it still has some of the strictest regulations on pot use.

But some lawmakers feel it is high time to take the next step in the marijuana legalization process. Currently, Washington and Colorado are the only states that legalize the sale of marijuana to adults for recreational use, but more states are considering legalizing the drug.

And a group of politicians in Illinois believe the state should join them.

Just over a week ago, four Chicago-area Democrats held a press conference, calling for the process of eventually legalizing marijuana to start in Illinois.

‘The main difference between the War on Drugs and Prohibition is that, after 40 years, this country still hasn’t acknowledged that the War on Drugs is a failure,’ Cook County Commissioner John Fritchey said, drawing a parallel with the outlawing of booze in the early 20th Century.

Illinois is already in the process of making medical pot available to those with a so-called legitimate need.

But backers of the effort – including Chicago-area state representatives Mike Zalewski, Kelly Cassidy and Christian Mitchell who also appeared with Fritchey at the news conference – cited a bevy of statistics that suggested pot legalization could help solve more than just medical ailments.

For example, racial minorities are often the target of enforcement efforts, they say. Meanwhile, their white counterparts are not arrested to the same degree for marijuana possession, they say.

‘You’ll see people getting swept off the streets on a daily basis on the South Side and the West Side. You don’t see kids getting arrested in Lincoln Park,’ said Fritchey, who is a former legislator.

But anyone pining for statewide legalization should probably sit down, order a pizza and chill.

The group has yet to drop a bill in Springfield to legalize the drug and, in reality, substantive change is likely a ways off, the group acknowledged. At this point they just want fellow Democrats in the General Assembly to green-light a task force to study the issue. The hope, they say, is that Illinois will eventually develop a more laissez-faire approach to pot, which for now is classified as a ‘dangerous’ Schedule I narcotic by the federal government.

Voters in Washington state and Colorado recently passed measures at the ballot box that did just that, though the new marijuana laws in those states are in conflict with federal drug laws.

In Illinois, action by state lawmakers would be required; the state does not have as robust a referendum and initiative process as the other two states, proponents said.

One upshot of legalization is that cash-strapped state and local governments could tax weed sales, delivering useful cash at a time when many are struggling to find new sources or revenue.

Illinois is not the first state to think about green-lighting marijuana. In 2012, voters in Colorado and Washington approved amendments that make it lawful for adults 21 years and older to possess up to one ounce of marijuana. The measures also allow authorities to regulate and tax the drug as they would alcohol.

Alaskans will vote on a similar initiative this November, and activists in the District of Columbia and Oregon are currently circulating petitions to put legalization on the ballot in 2014. If the initiative passes in the nation’s capital, it would then be up to the City Council to decide whether to set up a regulated and taxed system for sales.

Seven other states are already talking about putting legalization on the ballot in 2016, according to the Marijuana Policy Project.

The map below from Sun-Times data gives a better visual on which states are in the process of legalizing marijuana. 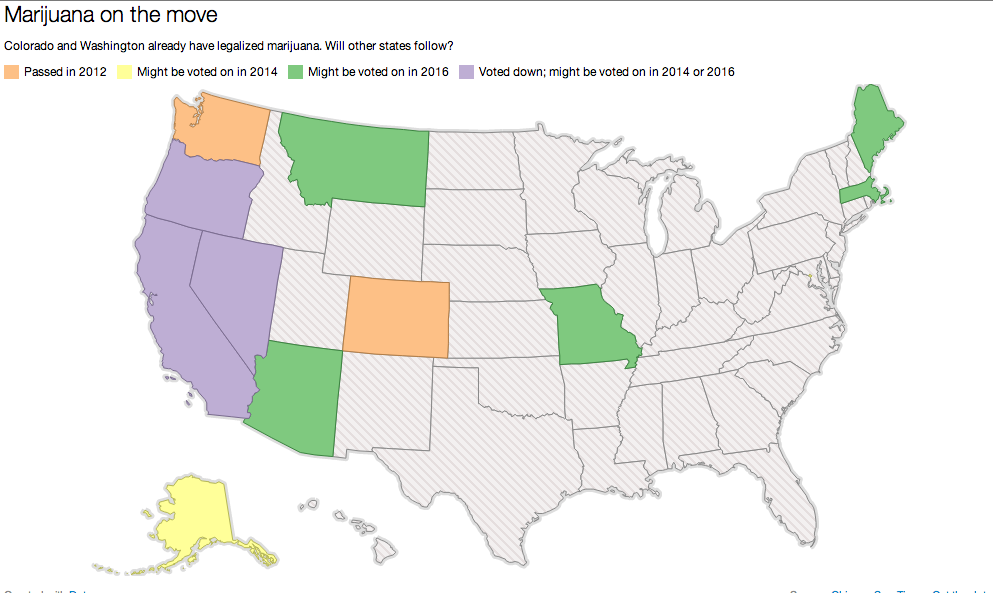 Illinois might join those states in the near future if four Chicago-area Democrats get their way.

Brendan Bond is an editorial assistant at Reboot Illinois. He is a graduate of Loyola University, where he majored in journalism. Brendan takes a look each day at the Land of Lincoln Lowdown and it’s often pretty low. He examines the property tax rates that drive Illinoisans insane. You can find Reboot on Facebook and on Twitter @rebootillinois.