Marijuana laws in Washington, DC, poised to be relaxed

Marijuana laws in Washington, D.C., poised to be relaxed

City council set to decriminalize small amounts of pot, but Congress could interfere

Of all the jurisdictions in the U.S. poised to loosen marijuana laws, the nation’s capital may not spring to mind as one to lead the way, but that’s exactly what is likely to happen in the weeks ahead.

Washington, D.C., city council is considering a proposal to decriminalize possession of small amounts of the drug, and a majority of council members have signalled their support for the measure, including Mayor Vincent Gray, who has veto power.

Anyone caught with less than an ounce of marijuana would get a fine of not more than $100 and no criminal record if the law is successfully changed. The offence is currently punishable by six months in jail and a $1,000 penalty for a first offence.

“The policy makers in D.C. are playing catch-up with the public,” said Grant Smith, a drug law reform advocate with the Drug Policy Alliance in Washington.

Smith said attitudes are changing and more people understand that drug use should be treated as a health issue. “We need to move in that direction as a city, as a district, but also as a nation,” he said.

Smith cites a poll done in April by Public Policy Polling that suggested 60 per cent of 1,621 voters in D.C. “strongly support” imposing a $100 fine and dropping the jail term for marijuana possession.

Support for looser marijuana laws is also growing across the U.S., suggested another poll released last month by Gallup. It put support for legalization, not just decriminalization, at 58 per cent. The states of Colorado and Washington recently legalized the drug and the federal Justice Department isn’t putting up a fight.

Smith said the proposal put forward by council members Tommy Wells and Marion Barry, the city’s former mayor, is a “great first step” toward ending the high number of arrests for small amounts of marijuana.

“Locking someone up and giving them an arrest record and burdening them with the consequences that follow doesn’t help anybody,” he said.

An arrest record can prevent someone from getting a job or home, he said, which not only hurts the individual but also his or her family and society in general.

Washington has one of the country’s highest arrest rates per capita according to a report by the American Civil Liberties Union. In 2010, there were nearly 15 marijuana-related arrests per day in a city of about 630,000 people. 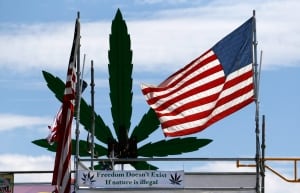 An American flag flies atop the stage at the first day of Hempfest in Seattle last August. A debate is currently underway in Washington, D.C., about the decriminalization of small amounts of pot. (Elaine Thompson/The Associated Press)

The ACLU estimates that the city spent $18 million on police enforcement of marijuana laws, $6 million on legal costs related to arrests and $2 million incarcerating people for marijuana offences in 2010 — money that could be better spent on drug treatment programs, for example, the group argues.

For some advocates, the drug arrests also suggest a racial bias.

A study produced this summer by the Washington Lawyers’ Committee for Civil Rights and Urban Affairs indicated that nine out of 10 people arrested for drug offences between 2009 and 2011 were black.

The numbers are disproportionately high given that marijuana usage among blacks and whites is considered to be about equal, and just slightly more than half the population is black.

“There is a huge question in our minds as to what these drug laws are really doing,” said Deborah Golden, a project director with the committee. When laws disproportionately affect one group more than another to such a great degree, “you have to look at whether those laws make sense,” she added.

Her group isn’t taking an official position on the decriminalization proposal, but Golden said the city has come a long way in its willingness to debate the idea.

“This was a discussion that nobody wanted to have 10 years ago,” she said. Golden said it’s likely no coincidence that the debate is now taking place during a time of shrinking corrections budgets.

Congress could block law from being changed

Two public hearings have been held in recent weeks and next the proposal will be studied by the council’s judiciary and public safety committee.

Not everyone is on side with decriminalization. Coun. Yvette Alexander is “wholeheartedly against” it.

“I just think it’s a disaster waiting to happen,” she said. Alexander worries that decriminalization would lead to greater use of it and would spur the illegal drug trade.

She is concerned about the high arrest and incarceration rates of young black men from the city, but said relaxing marijuana rules won’t help.

“We need to reach the roots of the problem,” she said.

With a majority of the council prepared to pass the proposal and the mayor ready to sign off on it, perhaps as early as January, Alexander’s only hope is for Congress to step in and block the law from being changed.

Because of unique jurisdictional rules, which frustrate local politicians to no end, Congress is allowed to challenge the city’s laws. That’s where this pot debate could get even more interesting.

Congress hasn’t hesitated before to block marijuana law reform. D.C. residents voted in 1998 to support a medical marijuana program, but Congress used its legislative oversight powers and held it up for years. It finally became available a few months ago.

What signal will it send if America’s legislators on Capitol Hill next allow for the decriminalization of marijuana in the nation’s capital? Alexander said the rest of the country will be watching closely, and while she usually wants Congress to stay out of D.C.’s affairs, this is one time she’s calling for interference.