By KRISTEN WYATT 16 hours ago

DENVER (AP) — The nation’s first recreational pot industry opened in Colorado on Wednesday, kicking off a marijuana experiment that will be watched closely around the world. Already, it is attracting people from across the country.

Some of the sights in Denver, the Mile High City, on the historic day:

FROM THE JAILHOUSE TO THE POTHOUSE

Less than a year ago, James Aaron Ramsey was serving a brief jail sentence for pot possession. On Wednesday, the 28-year-old musician, having driven from Missouri, was among the first to legally buy weed.

He brought a guitar and strummed folk tunes for about 20 people waiting outside one dispensary for sales to begin, as light snow fell at times.

“I’m going to frame the receipt when I go home,” Ramsey said with a smile. “To remind myself of what might be possible. Legal everywhere.”

Others who were waiting in line shared their own pot incarceration stories over coffee and funnel cakes.

“They made me go to rehab for marijuana, but I’d get out and see all my underage friends getting drunk all the time,” said 24-year-old Brandon Harris, who drove 20 hours from Blanchester, Ohio.

“I had to do pee tests, probation visits, the whole thing. Trafficking conviction. Nineteen years old. For a plant, how stupid,” he said, shaking his head.

Tinted windows on a black limousine idling outside one Denver dispensary showed another side of the newly legal weed market — people eager to try legal marijuana, but not ready to be seen publicly buying it.

Addison Morris, owner of Rocky Mountain Mile High Tours, had 10 clients waiting in the limo who paid $295 for four hours of chauffeuring by a “marijuana concierge” who would help them choose strains and edible pot products.

“We’re your grandmother’s pot connection,” the 63-year-old said. “We’re not the hippie stoners who are going to stand in this cold and party.” 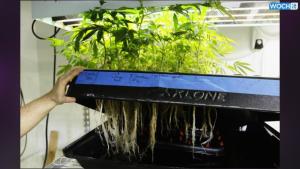 Morris said she’s booked through the end of February with out-of-state clients. Guests receive samples in designer bags before getting tours.

Morris said she’s selling discretion. Guests are asked to leave cameras at home. They avoided the crowd at the dispensary, where younger shoppers noshed on funnel cakes and doughnuts from a food truck.

Asked if her guests wanted any of the carnival-style treats, Morris recoiled.

“Oh God no,” she said. “We’re going to Whole Foods for breakfast.”

WILL THERE BE ENOUGH?

Not all marijuana users in Colorado are toasting the dawn of retail sales.

Some medical marijuana patients groups say they’re worried about supply. That’s because the retail inventory for recreational use is coming entirely from the preexisting medical inventory. Many in the industry warned patients to stock up before recreational sales began.

Laura Kriho of the Cannabis Therapy Institute said she worries prices will spike and patients will be left paying more if they’re not able to grow their own.

“We hope that the focus on recreational doesn’t take the focus away from patients who really need this medicine,” she said.

Their fears weren’t misplaced. Some recreational shops closed early Wednesday because of dwindling supply, and customers grumbled about prices going up.

For now, medical patients should have plenty of places to shop. Most of Colorado’s 500 or so medical marijuana shops haven’t applied to sell recreational pot.

AT LEAST THEY OPENED ON TIME 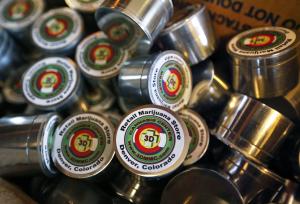 Some Green Wednesday openings were grand, with coffee and live music awaiting early shoppers. Others were more slapdash. As in, not sure until the sun went down New Year’s Eve they’d have all their licensing and permitting to open.

The Clinic marked the opening of sales by turning on a Bob Marley CD and hurriedly putting out inventory.

“Never thought we’d be able to get here, but we did it,” a bleary-eyed Cook said, hustling around his shop after a long night waiting for new packaging bags that comply with new Colorado regulations.

Recreational sales weren’t legal until Wednesday, but pot has been legal and free to share in Colorado for more than a year.

So marijuana aficionados gathered statewide to mark New Year’s Eve with a group toke to count down to when sales begin at 8 a.m.

At one party, a 1920s-themed “Prohibition Is Over” gala in Denver, women wore sparkly flapper dresses and men donned suits and suspenders to gather around communal rigs to light up together.

A jazz band played, TV monitors showed “The Untouchables” and revelers gathered around a craps table and several card tables. Most of the smoking was outside, but still the air was heavy with marijuana.

Marijuana shoppers Wednesday paid a price for shopping on the first day — long waits. Lines snaked down the street outside most pot shops, and the waiting crowds routinely gave a little cheer when shoppers emerged, bags in hand.

“How long have we been here?” one marijuana shopper asked his buddies as they emerged from one shop. The sun was setting and the group from Olathe, Kan., hadn’t yet checked into their hotel. They’d arrived at the pot shop five hours earlier.

The group was smiling, though.

“To be able to buy this legally, a much better quality than anything I could get at home, and know it’s safe and OK? That’s a good thing,” said Chris Albrecht, a 25-year-old jazz drummer on his way to a ski vacation in Winter Park.

Shoppers huddled in gear more frequently seen on ski slopes, then at times peeled off outer layers to T-shirts as they passed the time snacking on hot dogs and sharing stories about marijuana.

One of the hungry shoppers was Andre Barr, of Niles, Mich., who picked up a hot dog and shivered during a gusty stretch of his wait.

He said the mercurial weather didn’t bother him a bit.

“This is a huge deal to me,” Barr said. “At home, I live in fear. Because you will go to jail for the crummiest amount. This feels like liberation.”

Kristen Wyatt can be reached at http://www.twitter.com/APkristenwyatt .